It is surely that time of the year: colder, misty mornings when you wake up and your toes curl up as they touch the cold kitchen tiles and you hurryingly slip your feet into comfy slippers, when a chilly wind can be heard outside and you wrap yourself a little tighter with your old yet functional gown. I really want to get excited for winter’s arrival as I dream of the Highveld winter with it’s sunny, clear blue skies yet freezing temperatures, but I can’t express enough how much I dislike the cold.

As a cheer-me-upper I decided to bake these citrus inspired muffins. I find that poppy seed and lemon baked goods can often be a bit dry, so I added a generous dollop of cream cheese in the center before baking them. They made wonderful lunchbox treats for the kids and they also filled the breakfast hunger spot for myself.

My daughter’s best friend’s parents happen to be good friends of ours. Two weeks ago she received news that her brother passed away. He was suffering from an infection which had left him in a vegetative state for over a year. She travelled back to her home town in Thailand soon after which left her husband to look after my daughter’s friend and her younger sister.

To give him a helping hand we invited them over for dinner tonight because from what I heard his speciality has been mince on rice 🙂 I prepared a vegetarian lasagne with chicken nibbles and fresh ciabatta bread to soak up the sauciness. The lasagne took a whole lot longer to prepare than the 1/2 hour I gave myself. The vegetable  sauce took the longest to boil down and thicken. But in all honesty, it was well worth it! All 4 children gobbled it down with my son (not a trusty veggie eater) exclaimed afterwards, “It wasn’t good, it was delicious”.

For dessert I turned a traditional South African peppermint crisp tart into a dessert cup. A peppermint crisp tart is made from a South African chocolate called Peppermint Crisp which is roughly grated and then folded into a cream and caramel mixture. We use a coconut based biscuit called Tennis biscuits to form the biscuit base. You start off with a layer of biscuits, followed by the cream mixture. Repeat the layers until you have the required height/size you want. Top the tart or dessert cup off with left-over pieces of peppermint crisp chocolate. It needs to set in the fridge for at least an hour before serving. The dessert cups were reasonably large and after a filling dinner it was a bit overkill, so I would suggest serving these in small jars.

Whisk cream until thickened. Add the Caramel Treat and gently whisk until the mixture is well combined and smooth. Add the grated peppermint crisp (but leave some for the garnish) to the mixture and fold in until well combined. Layer the mason jars, starting with the crushed biscuits and followed by the cream mixture. Repeat until the jars are filled to the top. Garnish with left-over peppermint crisp. Let it set in the fridge for 2-3 hours. Enjoy!

I am not a huge breakfast eater at home. Now I don’t mind going out to a cafè, sit, relax and eat till my tummy is satisfied but that’s a luxury we don’t have at the moment so home cooked breakfasts it shall be. I usually have egg or avo on toast, and there was a time when I enjoyed muesli, fruit and yogurt but the trend seems to wear off and I get bored with my meals.

I’ve seen some incredible creations lately of oatmeal and/or smoothie bowls so this morning I tried making something hearty and warm for myself and the kids. Luckily my pantry is stocked with rolled oats as I often use it for baking the kids’ school treats. The rest of the ingredients I sourced from the freezer and fridge. I made a mixed berry oatmeal, topped with sliced plum, almonds and additional berries. I lightly sprinkled cinnamon sugar over as I know my kids will ask if they can add some sweetner. 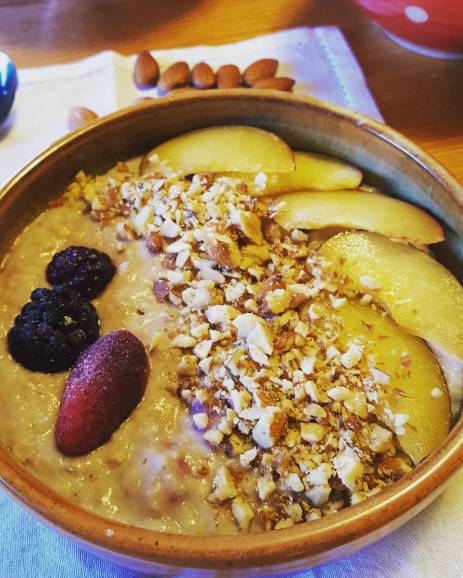 Breakfast took me 10 minutes to make and it was filling and satisfying. With winter approaching this will surely become a favorite in the house.

What is your go-to winter breakfast? 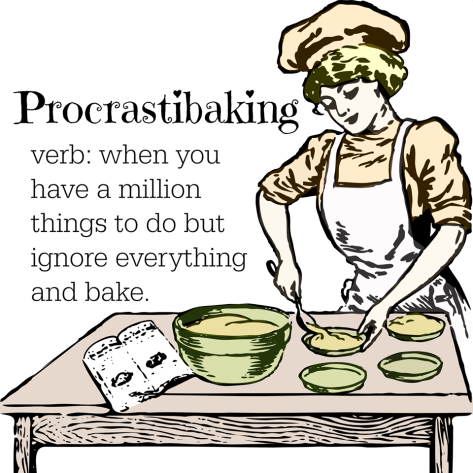 My sister tagged me in a post on Facebook to which I could only giggle as it is so very true. I have always enjoyed baking but only truly found my passion for it over the past few years. I think it came about when I started baking to fundraise for my daughter’s gymnastics competitions back in 2011. We had additional costs that year as we were travelling up to Auckland from Cambridge once a week for extensive training. I started out by baking one of the best biscuits I had ever tasted called Death by Chocolate biscuits. It is not an easy biscuit to bake compare to the ones I bake now, but they are devilish good. Rich, sweet, decadent and literally melt in the mouth.

Soon afterwards my husband bought me my first Nigella Lawson cookbook. I have made several of her desserts and baked goods but what I love the most about her books is the way she writes them. You might as well be having a one-on-one conversation with her. It’s personal, funny, witty, just like her.

Baking cakes only started in 2013 when I worked for a company where sharing your baking was considered the best thing since slice bread. At first I didn’t want to step on anyone’s toes (the seasoned company bakers) so I didn’t bake anything for the first few months. It was only when we moved to our new premises in April 2014 and we lost more than 1/2 of our workforce that I brought my baking in. I baked traditional and fail proof cakes, muffins and biscuits at first. It was through the encouragement of my work mates that I started experimenting with flavours and cake combinations. Whatever I baked I took with to work. I baked for individual employees, whether it was to celebrate their birthday or send them off as a farewell. I felt great joy when I could share these baked goods with them. My most memorable cake was the Hummingbird Cake which I baked for the sales manager’s farewell. It was rustic and full of flavour and oh so pretty. 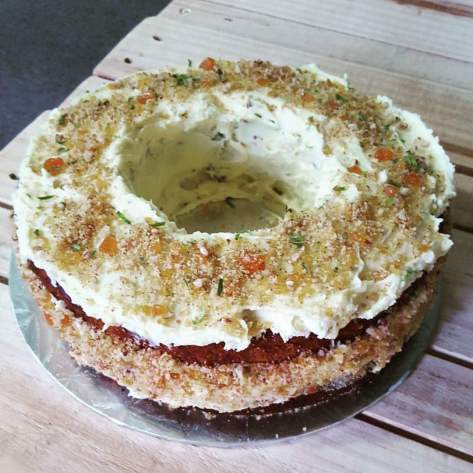 Today I still mainly bake to share. I bake to give as gifts, to show love and empathy when friends loose a loved one, for my husband to share at work (expecially when the ladies ask for anything sweet with chocolate). One of those cakes was a traditional Black Forest Cherry Gateau. I baked it for my husband’s birthday so naturally he took it into work for everyone to share.

I brought an avocado to work hoping that I could get a croissant from the bakery and make myself a filled pocket of goodness for lunch time, but there were no croissants available. I walked through the bread isle and spotted an interesting looking bread. It was oval shaped with a patterned crust. At only $3.50 and with a name like ‘Tiger bread’, for the loaf I decided to buy it as it will not go to waste.

I can honestly say that it is THE BEST white bread I have yet tasted. It is soft, tasty and a crust that doesn’t break your teeth when biting into it. I dressed these beautiful little pillow like slices with fresh avocado and it was like eating a cloud (if clouds taste like avo on white bread). I had to restrain myself from devouring the entire loaf.

I had an “Ah-ha” moment when I thought of using the rest of the loaf and make pan fried garlic bread for dinner. It is so easy and quick. I couldn’t wait to get home and start with dinner. We don’t have fresh garlic but there is always a tub of crushed garlic in the fridge. I softened a whole heap of butter, mashed the crushed garlic into it and thickly smeared each slice with the garlic butter. Into the hot frying pan they go, and a minute later you have crunchy, buttery, garlic reeking slices of wholesome soul food.

Hope you have your feel good food today.